That stem cells can be generated from urine is not new; previous studies have shown that cells discarded in human urine can be coaxed to become induced pluripotent stem cells (iPSCs), which themselves can generate many different cell types, including neurons and heart muscle cells. But researchers had yet to generate solid organs or tissues from iPSCs — until now. 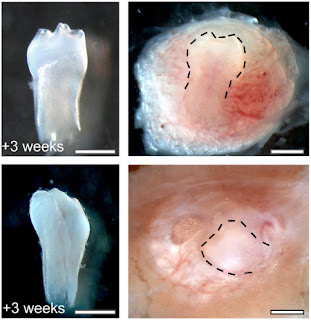 Duanqing Pei and colleagues have developed a novel chimeric tissue culture system to coax human urine-derived iPSCs into tiny structures that resemble teeth. The system mimics normal tooth development, which results from an interaction between two different cell types; epithelial cells, which give rise to enamel, and mesenchymal cells, which give rise to the other three main components of teeth (dentin, cementum and pulp).

First, the team used chemicals to coax the cultured iPSCs into flat sheets of epithelial cells. They then mixed these cells with mouse embryonic mesenchymal cells, and transplanted them into mice. Three weeks later, tooth-like structures had grown.

The primitive teeth-like organs are structurally and physically similar to human teeth. They are of roughly the same elasticity, and contain pulp, dentin and enamel-forming cells. But the method has its limitations — it involves mouse cells, has a success rate of around 30% and the structures were about one-third of the hardness of human teeth.

To resolve these issues, human mesenchymal stem cells could be substituted for mouse ones and the tissue culture conditions tweaked. The revised method could, in theory, be used to create a bioengineered tooth bud that could be cultured in vitro then transplanted into the jawbone of a needy patient to form a fully functional tooth.

iPSCs are of interest over embryonic stem cells because their derivation avoids the controversial use of embryos. iPSCs have previously been derived from cultured skin and blood cells, but urine represents an more readily accessible source. Cells generated by this method would not be rejected by the host recipient, as they would be derived from the host’s own cellular material. iPSCs remain a great source of hope for regenerative medicine.

The above story is based on materials provided by BioMed Central Limited, via AlphaGalileo.